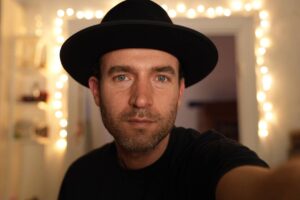 Julian Neville is a citizen of Germany and the United States. He grew up with a love of the arts, fostered by his family. His father would record books for him to listen to on his unaccompanied flights across the atlantic. As an independent, international young man, he was exposed to a world of ideas, which spurred him on to pursue a career in the creative realm. He got his MA in Media Art from the Academy of Media Arts Cologne in 2008, and has since worked as a documentary filmmaker, commercial editor, and pursued his passions as a musician, dancer, and screenwriter.

Dancing became a theme in his acclaimed documentary Lowlight, about an underground dance scene in New York that struggles to find freedom of expression in post-9-11 New York, where civil liberties are increasingly diminished and an anti-dancing law has been re-enacted by then mayor Rudy Guiliani.

Julian is currently wrapping up production of the short film “The Cut”, a pandemic dramedy about a young couple that struggles with the life-or-death-consequences of an illegal haircut. He is an author for arte Tracks and, as part of the directors duo Lilnjules, is currently writing and directing a documentary series about the L.A. Beat Scene.

Julian is bilingual in English and German and speaks French fluently.